The IPCC special report on climate change: We must do better!

Earlier this month, the Intergovernmental Panel on Climate Change (IPCC) released a report that asserts the 2020s are “ground zero” in the battle to save our planet from widespread devastation. In short, the report says that humanity faces global food shortages, the flooding of coastal cities, climate-related poverty, 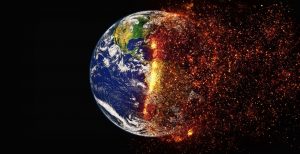 and a refugee crisis if we do not take unprecedented measures in the next 12 years to make extreme changes to land use and technology. We would need to reduce carbon pollution by 45% by 2030 and come down to zero by 2050 in order to avert a severe climate crisis, scientists say.

The report addresses possible scenarios for what the world might look like by the end of the 21st century if the planet warms by 2.7 degrees Fahrenheit (1.5 degrees Celsius). It appears that these scenarios – which include impacts such as more frequent, deadly heat waves and droughts, floods, and dying coral reefs – are best-case scenarios. Rapid, large-scale changes to industry, transportation, and individual consumption of energy and products will be necessary in order to keep us from more realistic scenarios, which are terrifying to even think about.

In Florida, impacts of climate change are already being seen: our already hot state is getting hotter, with more days of extreme heat; warmer waters fueling more powerful storms; and, of course, the Sunshine State is ground zero for sea-level rise.

It is important to recognize that working on the IPCC report were 91 leading scientists from 40 countries who, together, examined more than 6,000 scientific studies.

Also, our methods of transportation MUST change: late last year, the transportation sector in the U.S. surpassed power as the biggest source of greenhouse gas emissions.

You may ask, “What can I do about any of this?” I’m going to assert that installing a solar energy system will have – by far – the most dramatic impact on your household’s carbon footprint. You can also eat less (or no) meat, use only energy-efficient appliances, change all of your light bulbs from incandescent to energy-efficient LEDs (please do this today – they pay for themselves in less than a year and last so much longer!), unplug devices when they’re not in use, purchase clothing and other items second-hand (while donating your own unwanted items rather than throwing them out), line-dry your clothing, and use an electric powered vehicle.

When you add up the carbon “savings” with various strategies, solar power is far and away the single biggest thing you can do to make a positive impact on the environment. Again, I understand that it sounds like I’m taking advantage of the IPCC report to give a sales pitch but I went into this business in an effort to make a positive difference for our planet and future generations. I believe that our work has been and will continue to be crucial in efforts to combat climate change. We will continue to try and save the world – one rooftop at a time!

We got to where we are today because of the individual choices every single person on the planet has made, every single day, since the Industrial Revolution kicked into high gear over 100 years ago. Every time we turn on a light, start a car, fly on an airplane, or drink from a single-use bottle or cup, we contribute to the problem. And the U.S., in particular, is the worst per capita in terms of carbon footprint.

So, what am I, personally, doing about it? In addition to my work in solar (and having solar on my own home), I drive an electric vehicle and we’re eating less meat than we used to. We’ve made other changes, too: last summer, I started using a stainless steel Thermos bottle for cold water and I love it! I enjoy an essentially everlasting supply of ice-cold water and have avoided using hundreds of single-use plastic bottles. Imagine if everyone did that!

We CAN fix this – and we must – for the sake of our kids and future generations but only if we learn, discuss, work, and change together. Please consider starting today.

To read more about the U.N. report:

We have 12 years to limit climate change catastrophe, warns UN

How to Understand the UN’s Dire New Climate Report

The IPCC: Who Are They and Why Do Their Climate Reports Matter?

« The dangers of using an unlicensed contractor | Consider installing solar before the federal tax credit is reduced! »
Loading Comments...