How, exactly, does solar energy work?

If you are reading this, it’s likely that you want to know more about solar power than just the basics. The basic concept is that sunlight hits solar cells, the solar 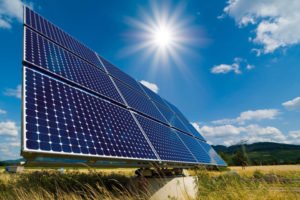 panel converts sunlight into electricity, electricity powers your home, and your utility bills decrease. So here is a little more detail on how that actually works. Well, a lot of detail.

A photovoltaic (PV) solar energy system consists of solar panels, which are groups of PV cells, an inverter, an electrical panel, utility meter, wiring and mounting hardware. Once mounted, there are no moving parts (except a cooling fan in the inverter) and, with a quality installation and reputable equipment, a system can last more than 30 years with little maintenance. Let’s break it down piece by piece:

made up of photons, or particles of light. When sunlight hits the silicon cells of a PV panel, the photons are absorbed by electrons in the material, which increases the energy of those electrons. If conductors are attached to the positive and negative sides of a cell, it forms an electrical circuit. With the flow of electrons through a circuit, electricity is generated. Each cell of the PV panel only raises the energy of the electrons a little bit (about 0.5 volt per cell). PV cells are arranged on the panel in series, which allows the electrons to essentially “climb” a ladder to higher and higher energy/voltage. Once the voltage is high enough – most 60 cell panels put out about 30 volts – the electrons are sent to the inverter, where they can do work with all the energy they have acquired.

The inverter – which is the “brain” of a solar power system – is an electronic device that converts the DC electricity produced by a solar array into the alternating current (AC) your house uses (this can also be referred to as “grid electricity” or “mains supply”). Inverters also have necessary safety features – they monitor the grid and switch off in the event of a major fluctuation in grid supply [See “Rapid Shutdown” – click on photo to enlarge.] Central or “string” 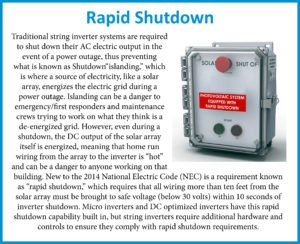 inverters optimize production for the entire solar array or a series “string” of panels in the array; micro-inverters and DC optimized inverters optimize production for each individual solar panel. Panel level production optimization can be important when variable shading of the array is an issue –  if you have trees, panel level optimization can increase production dramatically – and in situations where there are multiple roof faces and orientations (which get different amounts of sun during the day). Micro-inverter and DC-optimized inverters also offer certain additional safety and monitoring features that are gaining importance and popularity.

Your electrical panel – which is often called a “breaker box” – receives the AC electricity from the inverter and powers your lights and appliances with it.

The utility meter measures your energy use. Many states, including Florida, have “net metering” laws that allow you to get credit for electricity you send back to the grid when your solar array is producing more energy than you are using in your home or business. The excess energy can then be used that night, the next cloudy day, or even the next month.

Finally, a solar contractor will work with you to choose the best fasteners and mounting hardware for your roof and your system. In Florida, with hurricanes an omnipresent threat, there are stringent wind load standards to consider. For each type of roof – asphalt shingles, 5V metal, standing seam metal, membrane, or tile – there are a variety of fasteners best suited for each material, to ensure a quality installation. And there are a variety of mounting systems that impact performance and aesthetics. Your contractor should be happy to educate you about your options.

That’s your “How Does Solar Power Work 101” lesson for today, so if someone asks, you can say, “It’s the Czochralski process!” If you have any questions, or would like to know more about how a solar PV system can reduce your energy bills while increasing the value of your home, give us a call at (941) 359-3700.