FAQ: How do the changing seasons impact my solar system’s performance?

We are asked all the time about the factors that can impact the energy output of a solar array. Geography is certainly one of the top factors. With approximately two-thirds of its days per year being sunny, Florida ranks third in the nation for rooftop solar potential (due to its solar resources and its population). Other factors include the cleanliness of solar panels, and weather and seasonal variations – the angle of the sun to solar panels changes with the time of day and time of year.

In order to understand how the solar resource varies throughout the year, we need to introduce a new term: “peak sun hours.” As the sun travels through the sky during the day, the amount of sunlight hitting your roof varies. “Peak sun” is defined as sunlight intensity of 1,000 watts per square meter (i.e., very strong sun on a very clear day). One “peak sun hour” is 1,000 watts per square meter for one hour (that also happens to be one kilowatt hour – of sunlight! – hitting that surface in that hour).

In reality, the amount of sun that hits a surface varies through the day, so we total up all of the instantaneous power levels as the day goes on and divide by 1,000 to get the equivalent energy in “peak sun hours.” So, by looking at the table above, you can calculate that on a clear day in December, a one square meter surface will receive 3,950 watt hours of energy from the sun, or 3.95 kilowatt hours of sunlight. Compare that with April, when that same one meter area will receive 6,620 watt hours (or 6.62kWh). That means that April receives nearly 68% more sunlight per day than December.

So don’t despair if your energy output dips a little during the winter – brighter (and, thus, more productive) days will come soon!

Click HERE to send us your question about solar – if we choose your question in an upcoming newsletter, you’ll receive a free Brilliant Harvest T-shirt! 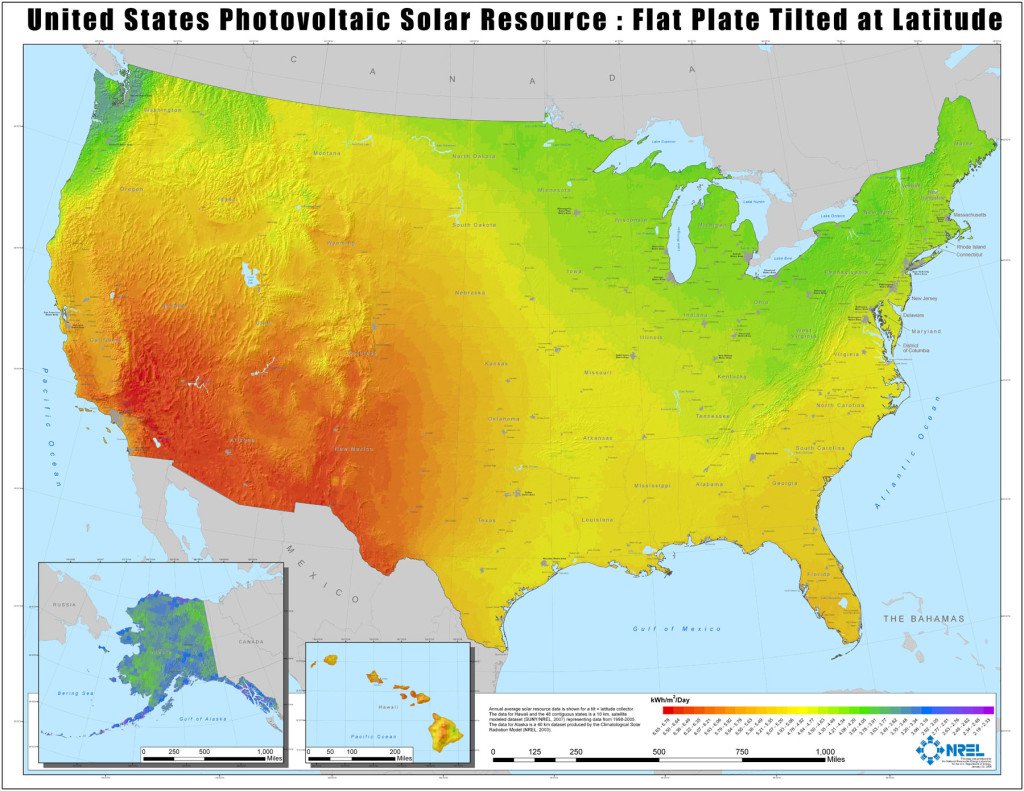 The map shows kilowatt hours/m2/day; map produced by the
National Renewable Energy Laboratory for the U.S. Department of Energy.